What would we do without beers?

What would we do without beers?

Beer is delicious and everybody knows it. Beer is a perfect accompaniment for a casual dinner with your mates, its great to open up a cold one on a sunny afternoon over the Barbecue , it’s perfect for most occasions! Over the last few years we have seen a massive increase in craft beers as well. It all used to be the mass produced beers from germany, the USA or other countries. But now it’s all turned around in that small irish breweries are popping up everywhere we look. There are now countless IPAs, pale ales, Rye ales, american pale ale and dark ales, the list goes on! People are in love with them, and so are we! Bord Bia gives us the facts in that the number of craft breweries in Ireland has grown by more than  500% in the last 5 years, with 72 now in operation, up from just 15 in 2012! Employment in this area exceeded 500 for the first time ever, increasing employment in local and rural communities.

The History of beer goes back years and years and years. The recipe for beer is one of the oldest recipes in the world. Ancient Egyptians first documented the brewing process on papyrus scrolls around 5,000 B.C.  It first made with figs, dates, herbs and many other fruits that were found. It was made with barley and It was fermented with wild yeast that was found at the time. In these times, it was usually made for religious ceremonies and very special occasions. Because it was so easily made and very intoxicating, it spread to europe and so more and more beer was being made all over the world. Hops was only added to beer to increase flavour in the 12th century. We can see how it has grown since, with new coffee or chocolate or orange flavours being added to beer to enhance flavours. How its changed!

So how is beer actually made? It’s a fascinating story that all begins with with the grain. There are 7 main steps in the brewing of beer, these include mashing, sparging, boiling the wort, cooling the wort, fermentation, carbonation and packaging. 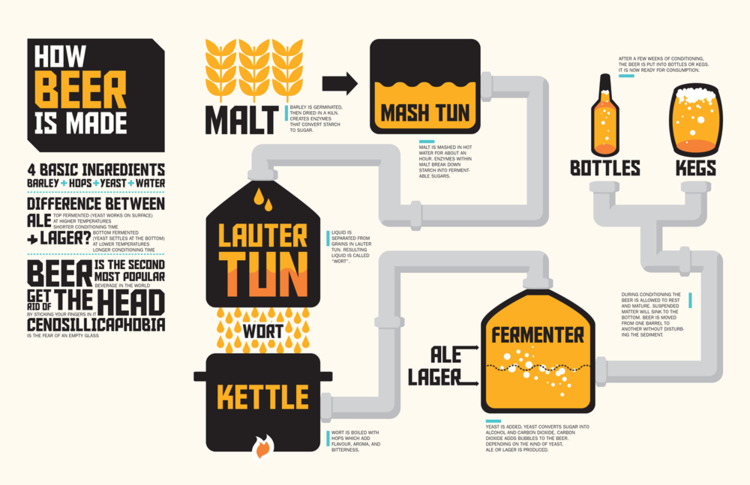 Here in the ridder we have a classy range of beautiful beers. On draft we have the dark delight that is guiness and cooling Carlsberg. In our 500ml bottles we have a craft beer from wexford, known as the Clever Man. A gorgeous brew! We also have the galway hooker beers in a pale ale and and amber ale, both delightful. We also served up some sweet cider from cider mill slane. In our 330ml bottles we have have a Bru red ale, IPA and lager. Only the best for our beer lovers! Why don’t you drop by and have a taste yourself, Check out our website for more details!

The comments are closed.